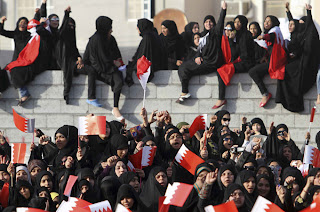 Anyone who supported the pro-democracy movement is vulnerable to being accused. The activists were accused of having links to a 'terrorist organisation abroad'

"....Anybody in Bahrain who supported the pro-democracy movement, which began at the height of the Arab Spring on 14 February, is vulnerable to being accused of plotting against the Government at the behest of Iran. The sentenced activists were accused of having links to "a terrorist organisation abroad". Fourteen were tried in court and the other seven in absentia. In addition to the eight life sentences, 10 activists were given 15-year terms, two others received five years and one was sentenced to two years.

The decision is likely to undermine a US and UK-backed attempt to persuade the Sunni al-Khalifa monarchy to start a dialogue with the opposition.

America and Britain have been embarrassed by accusations of hypocrisy for denouncing human rights violations in Libya while ignoring compelling evidence of systematic torture by the state security forces in Bahrain....."
Posted by Tony at 3:00 AM