Syrian refugees on the Turkish border: Stories of murder, rape, intimidation and thuggery 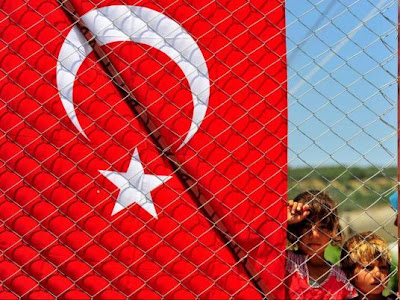 "Hatay Province, Turkey - Behind the barbed wire surrounding the refugee camp located in Hatay Province, near the Turkish-Syrian border, stands Khitam, a six-year-old Syrian girl, who along with her family fled the Syrian regime’s crackdown on the protest wave sweeping the nation.....

At the gates of one of the camps, we met with Amm Mohamed and his two little girls.

“They don’t even have mercy for the weak women...there were cases of rape. Even the Syrian Air Force struck us in what seemed to be a genocide [This should make Hassan Nasrallah's day!]. Before they came, they sent thugs to burgle our homes.”

Only steps away from tent we could hear Syrians chanting. “The people want to bring down the regime,” they said in unison.

As we approached them a young Syrian man came up to us and said, “Where is the Arab League?! Why hasn’t the Arab League Chief come to see what has happened to us and listen to us?! Or is he too busy?!”...."
Posted by Tony at 6:41 AM