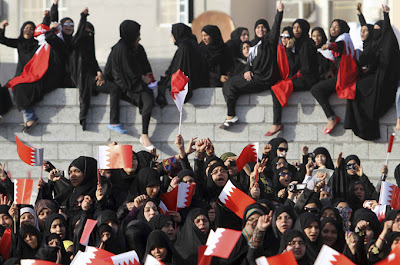 "Bahrain has sentenced eight prominent activists to life in prison for plotting a coup during protests that rocked the Sunni-ruled Gulf island kingdom earlier this year.

The court on Wednesday also sentenced other defendants, from among the 21 suspects on trial, to between two and five years in jail.

Mushaima returned to Bahrain in February, from self-imposed exile in the UK after authorities dropped charges against him.

Ibrahim Sharif, the Sunni leader of the secular leftist group Waad, was sentenced to five years. Waad had joined the largest Shia opposition group Wefaq in calling for reforms to the constitutional monarchy.

Authorities claimed the activists had sought to overthrow Bahrain's Sunni monarchy and have links to "a terrorist organisation abroad" - a veiled reference to Iran.

Witnesses say demonstrators made roadblocks with sand and debris, and called for marches to oppose the trial. No violence was reported.

On Tuesday night, several villages had demonstrated in solidarity with the opposition leaders facing charges...."
Posted by Tony at 3:13 AM