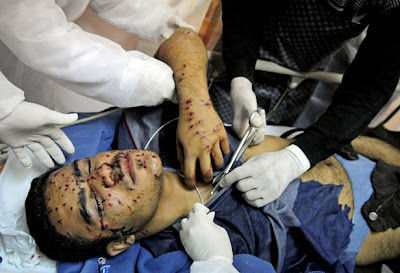 "The government of Bahrain faces fresh allegations that it systematically tortured people it suspected of taking part in demonstrations against its autocratic rulers earlier this year, and of deliberately undermining the country's health system as 20 doctors go back on trial today for their supposed role in the protests.

One of the world's most respected humanitarian organisations, Médecins Sans Frontières (MSF), alleges that security forces loyal to the tiny Gulf state's authoritarian leader, King Hamad bin Isa al-Khalifa, regularly beat hospital patients who had injuries that could have been sustained during the rallies that started in February. It also says that, after working alongside the country's doctors and nurses for months, the charges against them are without merit.

The MSF testimony is the first to document the existence of what was effectively a torture chamber maintained by Bahraini forces within the hospital. And it provides fresh evidence that retribution was not limited to the alleged ringleaders of the protests....."
Posted by Tony at 3:53 AM