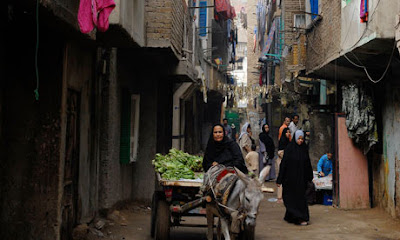 Despite up to 1m apartments lying empty across the capital as a result of years of property speculation under Hosni Mubarak, a dearth of affordable housing means that most have nowhere else to go. But now, in the aftermath of the dictator's ousting, Egypt's ashwa'iyat community is beginning to raise its voice.

"In the past we were living without any respect for our lives," explained Zamzam Mohamed Abdel Nabi, a 35-year-old resident of al-Me'adessa who has been leading a local campaign demanding that the government rehouse them. "Currently we're optimistic that things could change. But the state is still fragile and we don't want to profit from the situation for our own self-interest. This is the transition period, and in such a period the important thing is to build, not destroy."

Her dilemma is a common one among the 44% of Egyptians living below the poverty line: with old certainties dissolved and the nation in flux, now appears to be the perfect time to press for a better standard of living from a revolution that has already transformed the state's political apparatus.

But the country's ruling generals have cracked down harshly on what they call "sectoral" interests, insisting that Egypt is too unstable at the moment to meet the vast array of social expectations that have exploded since Mubarak's fall. Strikes and protests have been outlawed on the grounds that marginalised groups – be they workers, women or slum-dwellers – should stay quiet until the transition to civilian democracy is complete.

It is an argument that cuts little ice....

"The revolutionary spirit is so far focused on changing national political structures, and even if successful there is no guarantee that the manipulators and opportunists and bribers, so prominent in the past, will not still find fertile ground," he writes. "Another, more complicated revolution is needed for fundamental reform of ministries and governorates, the courts, and economic authorities so that real accountability and transparency begin to dominate urban development."....."
Posted by Tony at 4:12 AM