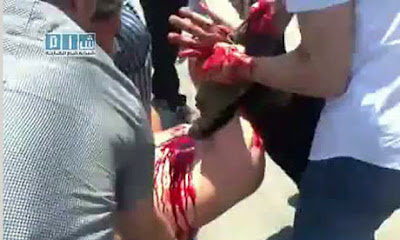 Shot people taken to hospital across border after crackdown on demonstrations in Damascus, Homs and Aleppo

"Hundreds of Syrians have fled to Lebanon after 20 people were killed in the biggest day of protests against President Bashar al-Assad.

Up to 1,000 Syrians escaped through the al-Qusair crossing in the region of Akkar near Wadi Khaled in northern Lebanon, according to a Lebanese security official.

At least six of those who crossed the border had gunshot wounds and were admitted to hospital in Akkar, the official said.....

The scale and geographical spread of the latest protests – dubbed "the Friday of the end of legitimacy" – appeared to underline Assad's failure to dampen opposition fervour.

In an address to the nation on Monday – his third since the start of the anti-regime demonstrations – he spoke of dialogue and reform, but democracy activists dismissed his offers as cosmetic or insufficient.

Opposition leaders in Damascus are reported to be planning a public meeting next week to discuss strategy."
Posted by Tony at 3:54 AM