Ahdaf Soueif in Cairo: 'By early evening it was clear that this was Revolution II' 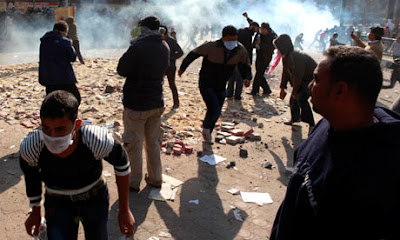 "....Egypt is much more than Tahrir Square. People across the country are demanding the abdication of the Supreme Council of the Armed Forces (Scaf). On Tuesday night as the news cameras concentrated on Tahrir, the army and police were attacking citizens in other places: Alexandria, Assiut, Aswan, Damietta, Ismailia, Luxor, Mahalla, Mansoura, Sohag and Suez.

And yet, of course, in this age of spectacle it was the images of Tahrir that were most shocking. We could hardly believe that Scaf would allow that image which had become such an icon across the world – Tahrir Square teeming with citizens, decorated with flags – to reappear clouded with teargas. But they did.....

We're saying these are "Ayyam el-farz" – the days of sorting, if you like. The situation is very intense. On Wednesday night, at that flashpoint where a truce was brokered at 3pm and broken at 5pm, the army and police shot protesters at sunset prayers. The field hospitals in Qasr el-Doubara Church and Omar Makram Mosque are calling for neurologists; the motorbikes have brought in 50 cases in the last 10 minutes."
Posted by Tony at 4:32 PM