Tahrir Square stands united after week of bloodshed and betrayal 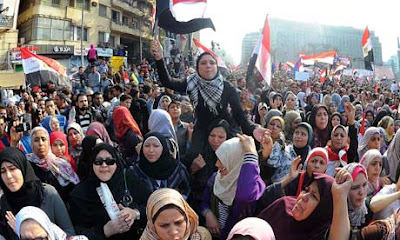 "The stages were dismantled, the microphones muted. This was not a day for squabbling voices among Egypt's growing band of protesters. Instead, the plan was for Tahrir Square to reverberate with a single, simple demand. Military rule must end, and end now, the crowd roared as one. The time for compromise was over.

But compromise is exactly what the ruling generals had in mind as they unveiled the new prime minister, Kamal el-Ganzouri, the latest weapon in their battle to shut down a crisis that has now claimed more than 40 lives and thrown the country's political landscape into turmoil. A former Mubarak-era prime minister, Ganzouri, 78, is reprising his old position at a time when the public appetite for genuine change has never been fiercer.

The supreme council of the armed forces [Scaf] will be hoping he can convince the wider public that their transition plan – including national elections that, improbably, are due to start in just two days time – remains credible.

What the generals' next action will be remains to be seen, as does the outcome of the parliamentary vote, which is scheduled to start on Monday.

It seems remarkable that Egyptians will begin queuing at polling stations even as multiple parties withdraw from the race, city centres remain occupied by protesters and bloodshed continues on the streets.

But then nothing in this country has been unremarkable over the past 10 months and, judging by the current atmosphere in Cairo's Tahrir Square, it seems that is the way things are set to stay."
Posted by Tony at 1:08 PM