Egypt's Muslim Brotherhood continues to alienate itself from the people 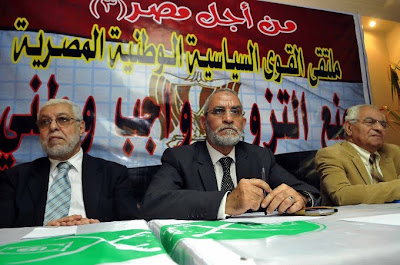 As Egyptians lie dying, the Brotherhood's blatant self-interest and arrogance is exposing them to public scrutiny and scorn

"As the brutal crackdown against peaceful protesters in Cairo and several other Egyptian cities continued unabated for six days running, the Muslim Brotherhood stayed out of the fray, declaring clearly that it would not join the protests.

In deciding to stay away from these protests, the Brotherhood may have committed its gravest mistake to date. The footage showing a dead protester being dragged by a security officer and dumped near a rubbish heap, appearing on many satellite channels and the internet, has not only shocked and enraged Egyptians, but it has sent them out on to the streets in their thousands to protest against this outrage.

In going out they had no political calculations in mind and no gains to make. They simply wanted their voices to be heard. By staying away, the Brotherhood has sent the message that it rated its self-interest higher than Egyptian blood and its decision has angered many Egyptians, including some of its own members....

Second, by its very nature the Brotherhood is an autocratic organisation. It is based on an anachronistic, pseudo-military hierarchical structure that concentrates power within the hands of a few leaders at the top. The rank and file are expected to swear allegiance and follow strict orders....

Since the early days of the revolution the exodus of young members has not stopped and it is not likely to stop as long as the same power structures remain in place. In the past week, many young members have declared their resignation and many more are showing signs of dissatisfaction. While the group might have managed to uphold its non-democratic principles in the past, it is highly unlikely that the status quo can be maintained any longer.

Third, throughout the past 10 months the Brotherhood, along with other Islamist factions, were often seen to align themselves with the ruling military junta instead of siding with people's legitimate demands......

While a large number of parliamentary candidates and parties have suspended their election campaigns in protest at the recent violence, the Brotherhood has decided to press ahead with its campaign. At the time when the streets around Tahrir and other squares looked like a war zone, with a large number of people falling dead or injured, all the Brotherhood could think of was the elections which they feared might be postponed or cancelled.....

Without making basic and meaningful changes to its structure and without undertaking a major revision of its discourse, the Brotherhood may well be on a slow road to nothingness. It will also need to remember that Mubarak's National Democratic party won elections and secured seats in parliament. But winning seats without a real popular mandate will only alienate the Brotherhood further from the people it claims to represent."
Posted by Tony at 8:39 AM