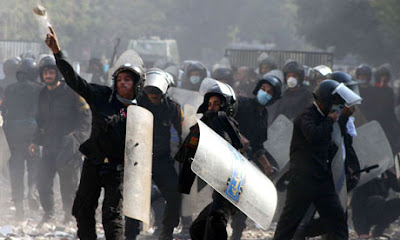 "Protesters engaged in Egypt's renewed revolt are calling for elections scheduled for Monday to be postponed and for a council of elders to replace military rulers who again on Wednesday sent security forces to quell an increasingly combustible street.

The rebirth of the uprising is now widely been seen as a second – and decisive – phase of the revolution that began on 25 January and led to the overthrow of President Hosni Mubarak three weeks later.

In the symbolic heart of the January revolution, Tahrir Square, demonstrators were chanting the same slogans used 11 months ago against the ousted despot, but this time directing them at interim military ruler, Field Marshal Hussein Tantawi....

Protest numbers in Tahrir Square have continued to build since Saturday and by mid-evening on Wednesday night a sea of people had occupied all corners, matching the scenes of January. "The people demand the end of the field marshal," said one large banner....."
Posted by Tony at 12:42 PM