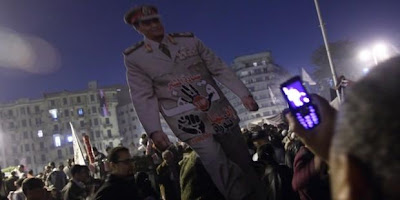 "Egypt's military rulers have completely failed to live up to their promises to Egyptians to improve human rights and have instead been responsible for a catalogue of abuses which in some cases exceeds the record of Hosni Mubarak, Amnesty International said today in a new report.
In Broken Promises: Egypt's Military Rulers Erode Human Rights, the organization documents a woeful performance on human rights by the Supreme Council of Armed Forces (SCAF) which assumed power after the fall of former President Hosni Mubarak in February. The report's release follows a bloody few days in Egypt that has left many dead and hundreds injured after army and security forces violently attempted to disperse anti-SCAF protesters from Cairo’s Tahrir square. "
By using military courts to try thousands of civilians, cracking down on peaceful protest and expanding the remit of Mubarak's Emergency Law, the SCAF has continued the tradition of repressive rule which the January 25 demonstrators fought so hard to get rid of," said Philip Luther, Amnesty International’s Middle East and North Africa Acting Director. "
Those who have challenged or criticized the military council - like demonstrators. journalists, bloggers, striking workers - have been ruthlessly suppressed, in an attempt at silencing their voices. "The human rights balance sheet for SCAF shows that after nine months in charge of Egypt, the aims and aspirations of the January 25 revolution have been crushed. The brutal and heavy-handed response to protests in the last few days bears all the hallmarks of the Mubarak era." Amnesty International found in its review of human rights under the SCAF that the military council had met few of the commitments it made in its many public statements and had worsened the situation in some areas.
By August, the SCAF admitted that some 12,000 civilians across the country had been tried by military courts following grossly unfair trials. At least 13 have been sentenced to death. Charges against defendants have included “thuggery”, “breaking the curfew”, “damaging property” and “insulting the army”. ......"
Posted by Tony at 4:05 AM