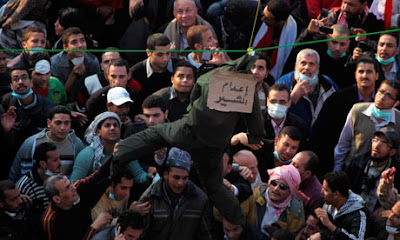 There had seemed too much goodwill to squander, but the military council's credibility has been shredded once and for all

"Two bizarre objects can be found in incongruous places in central Cairo. One is an eye patch, strapped carefully to a stone lion. The other is a straw doll, tied by its neck to a lamppost. Together they speak volumes about the journey Egypt's ruling generals have undertaken in the past 10 months, a journey which on Tuesday night looked like it might be nearing its end.....

How Scaf manoeuvres now to protect the military's economic and political interests will be shaped largely by the rapidly moving developments on the ground.

But with such a concrete shift in public opinion, it is impossible to see a permanent future for the coterie of army generals who arrived with so much hope and who are now staring out on an effigy of their leader swinging slowly in the wind, above a country that has rejected their rule."
Posted by Tony at 2:06 PM