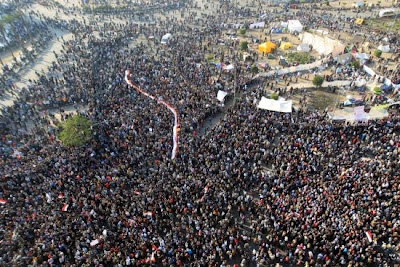 "....Tantawi's roll of the dice was bookended by fresh volleys of birdshot and teargas by the security forces, as fires in the nearby Bab el-Louq market caused by street fighting continued to rage. "Politics has returned to the street, and that's what Tahrir has always been about," said Yasmine Nassar, a 26-year-old consultant. "My mother wanted to come down to the square today, and believe me she is not the kind of person to attend demonstrations. When you have that level of feeling, it's impossible to evaporate it until all the demands are met. And the one demand here is clear: Scaf must leave." Behind her, a conga of desperately-needed medical supplies bound up in discarded grocery boxes snaked its way through the throng, and an approving flag-seller blew cheerfully on a whistle.