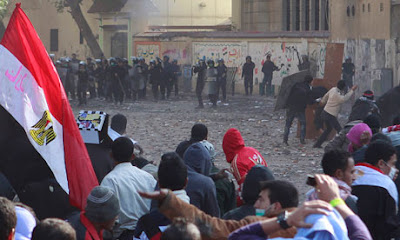 Our panel of writers look at the significance of renewed clashes in Tahrir Square. What does it all mean for the revolution?
Mohamed El Hebeishy, Amira Nowaira, Matthew Cassel and Sara Khorshid
guardian.co.uk, Monday 21 November 2011
"....
Amira Nowaira: 'An increased dose of violence will increase anger'
There is a strong sense of deja vu in what is happening in Egypt today. In 1954 Egypt's young officers created mayhem to justify their clampdown on opposition and renege on their democratic promises. The horrific events of the last couple of days in Tahrir and several other places in the country suggest that Egypt's ageing generals are reading the same manual and following the same strategy.
It is a strategy that the Supreme Council of the Armed Forces (SCAF) tried a few times in recent months, most noticeably in the Maspero incident on 9 October, when a peaceful Coptic protest was met with incredible brutality and many were run over by military trucks. The message sent by Maspero was not directed at Copts alone. It was a message sent to all Egyptians, telling them that SCAF would not tolerate dissent. Nor would it balk at using as much deadly violence as is required.
It is becoming increasingly and sadly evident to many Egyptians that SCAFstan is just an extension of Mubarakstan. But the question is: can SCAF really succeed where Mubarak had failed? This seems hugely unlikely, for an increased dose of violence will only increase anger and solve no problems. Unfortunately, this is a lesson that SCAF probably hasn't learned.
Matthew Cassel: 'Brutality is no longer a deterrent'
"The people want the downfall of the regime" became the iconic slogan when millions took to the streets earlier this year calling for the removal of President Hosni Mubarak. Today, almost 10 months after Mubarak stepped down, protesters are chanting the same thing but this time their target is the SCAF that has been running the country since February.
Much of the media is portraying what's happening as "clashes" in Cairo and elsewhere in Egypt with the implication that it's between two equal sides. Such a description is grossly misleading.
There is an ongoing revolution happening in Egypt. From the first day, the symbol of the revolution has been the sit-in protests at Cairo's Tahrir (Liberation) Square. In recent days, when the masses returned to Tahrir to ensure the revolution's forward progress, they were attacked. Instead of giving up their protest and letting the authorities trample all over their rights, they remained steadfast and fought back.
The revolutions in the Arab world were never going to happen overnight; it's going to take years to transform autocracies into democracies. Until that happens, street demonstrations in countries such as Egypt, Syria, Yemen and Bahrain (where massive protests are expected this week) will continue until the state and its security forces realise that their brutality is no longer a deterrent.
......"
Posted by Tony at 10:31 AM