Is Britain plotting with Israel to attack Iran? 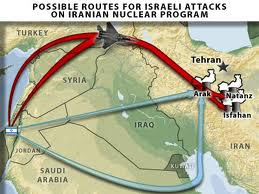 "Last February Britain’s then defense minister Liam Fox attended a dinner in Tel Aviv with a group described as senior Israelis. Alongside him sat Adam Werritty, a lobbyist whose “improper relations” with the minister would lead eight months later to Fox’s hurried resignation.

According to several reports in the British media the Israelis in attendance at the dinner were representatives of the Mossad, Israel’s spy agency, while Fox and Werritty were accompanied by Matthew Gould, Britain’s ambassador to Israel. A former British diplomat has now claimed that the topic of discussion that evening was a secret plot to attack Iran.

The official inquiry castigating the UK’s former defence secretary for what has come to be known as a “cash-for-access” scandal appears to have only scratched the surface of what Fox and accomplice Adam Werritty may have been up to when they met for dinner in Tel Aviv....

The murky dealings between Fox, Werritty and Gould, and the government’s refusal to clarify what took place between them, is evidence, said Murray, that a serious matter is being hidden. His fear, and that of his contacts inside the senior civil service, is that “a neo-con cell of senior [British] ministers and officials” were secretly setting policy in coordination with Israel and the US.

Gould’s unexamined role is of particular concern, as he is still in place in his post in Israel.

Murray has noted that, in appointing Gould, a British Jew, to the ambassadorship in Israel in September last year, the foreign office broke with long-standing policy. No Jewish diplomat has held the post before because of concerns that it might lead to a conflict of interest, or at the very least create the impression of dual loyalty. Similar restrictions have been in place to avoid Catholics holding the post of ambassador to the Vatican.

Given these traditional concerns, Gould was a strange choice. He is a self-declared Zionist who has cultivated an image that led the Forward, the most prominent Jewish newspaper in the US, to describe him recently as “not just an ambassador who’s Jewish, but a Jewish ambassador.”"
Posted by Tony at 7:08 AM