Egypt's military government is the enemy of our revolution 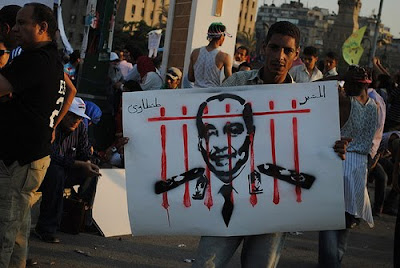 "....And right now, Tahrir is more full of people than ever. "Irhal! Irhal!" (Go! Go!) rings out once again; this time for Scaf. The one concession Scaf has definitely made is that it will refer last month's alleged massacre at the Maspero state TV building to civilian (rather than military) courts. It's not enough: Scaf has disgraced itself comprehensively over the past three days and must step down and hand over to a civilian president to form a government of national rescue.....

Perhaps beating up the revolution's injured on Saturday was meant to bring the young people out on to the streets to get killed. The country would get so inflamed that Scaf would have a pretext to postpone elections. Perhaps. It really doesn't matter. Because as things stand it's clear that the chances are we will go through elections to emerge with a toothless parliament – like the toothless Sharaf government – that will then provide cover for Scaf to write a constitution.

So the crucial thing now is to stand firm until Scaf hands over power. To whom? To a government of national rescue headed by any one or more of our potential presidential candidates – and this government would run the elections. That is what the revolution is back on the streets of Egypt for."
Posted by Tony at 1:50 PM