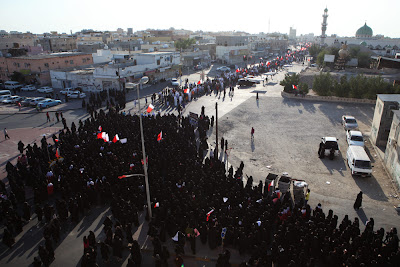 After Abdulnabi Kadhem's body was laid to rest, mourners' impromptu protest ended with clashes with police.

"Early on Wednesday morning, witnesses say that Abdulnabi Kadhem was killed in his car when it was struck by a police Land Cruiser in A'ali village in Bahrain. His family told Al Jazeera that Kadhem, a 44-year-old farmer who was working in his fields that morning, usually wrapped his head in a traditional scarf to stay warm in the early morning hours and was likely mistaken for a protester by riot police.

He died only hours before the release of the Bahrain Independent Commission of Inquiry. People in his home village told Al Jazeera that they were not optimistic that it would lead to major democratic reforms in the country, and, during Kadhem's funeral, they continued their calls for the toppling of the al-Khalifa monarchy.

Kadhem is the second person to be recently killed in a collision with a police vehicle. On Saturday morning, 16-year-old protester Ali al-Badah died after being struck in Juffair village.
Al Jazeera's Gregg Carlstrom and Mohamed Vall also reported from the funeral in A'ali on Thursday."
Posted by Tony at 4:28 AM