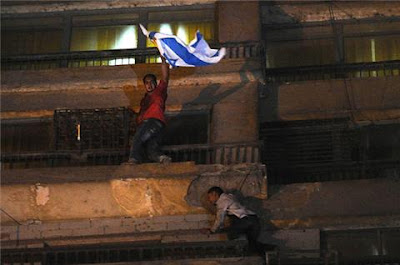 "In the midst of escalating violence between Egyptian protesters and security forces, former Deputy Chief Staff of Israeli Defense Forces Uzi Dayan is calling for the creation of an Israeli “intervention force” to fight terrorism in Sinai if necessary, the Israeli daily Yediot Aharonot reported Wednesday.

“We must prepare for the worst-case scenario whereby the Islamists come to power,” said Dayan. In the first stage, we have to prepare for increased terror in Sinai. There are worrying signs of terrorist Islam in Sinai already.”

One way Israel must prepare, he said, is to create an Israeli intervention force “that may have no choice other than to intervene in Sinai and fight terrorism there.”

The retired general is the nephew of Moshe Dayan, a former Israeli defense minister well-remembered for his signature eye patch...."
Posted by Tony at 3:49 AM