Americans get a Shabak Education 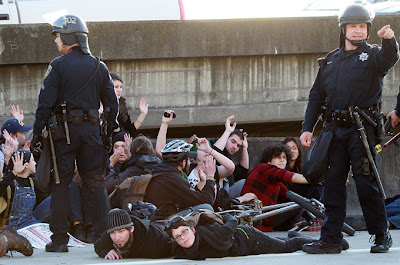 The world enters a new phase where the students are slowly becoming the teachers, forcing bloody change says author.

"Irvine, CA - It was a term that has stuck with me since a Palestinian friend in the Ajami neighbourhood of Jaffa first used it in response to one of my more naive questions. "Why don't you all do to protest against the on-going expropriation of land and discrimination against local residents by the Israeli government," I asked him on a typically sunny summer day, as we stood in front of yet another luxury housing development being constructed on formerly Palestinian land.

"Because we've all received a good Shabak education," he answered.

The education in question, was dispensed by the Shabak, or Shin Bet, Israel's state security services, to keep the country's Palestinian population from protesting too vigorously against the policies that have kept them second class citizens despite the official political equality granted to them by the Israeli state......

There is no need to compare campus police in California, or American police more broadly, with the far more brutal Egyptian police and security services. Americans aren't being crushed by APCs and shot by snipers. This is still a Shabak rather than mukhabarat education that Americans are receiving (of course the Iraqis, Afghans and others who are on the wrong end of the US military or CIA are getting much harsher lesson in American values).

But so are the similarities in the way protesters, whether in Egypt the US or even Israel are responding to the increased level of repression and marginalisation by their governments....

The thing about Shabak or mukhabarat educations is that they can't be sustained indefinitely. At some point, the people graduate, the students become the teachers, and the ruling elites are forced to learn the lesson that if removed, even the veneer of civility from the mechanisms of rule, and leave people feeling utterly betrayed by their government and with little to lose, they will lose their fear and you will lose your grip on power.

It's a long and bloody struggle, but it's clearly entered a new phase, not just in the US, Egypt or Israel/Palestine, but across the Middle East and the world.

A musician friend of mine in Cairo put it this way on his Facebook page after Saturday's violence: "25 January was the demo, now comes the album release". To put it in slightly more scholastic terms, it's a new year and class is now back in session. And if governments from Washington to Cairo, Tel Aviv or Damascus don't pay attention, they and their systems are going to fail out of school, and pass into the dustbin of history."
Posted by Tony at 3:18 AM