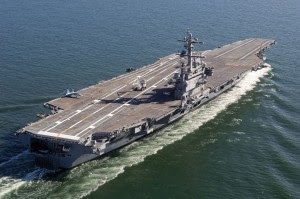 "The USS George H.W. Bush, the Navy’s newest aircraft carrier, has reportedly parked off the Syrian coast. The move comes as the U.S. embassy in Damascus urged Americans to “immediately” leave the country.
“The U.S. embassy continues to urge U.S. citizens in Syria to depart immediately while commercial transportation is available,” began a statement released Wednesday on the embassy website. “The number of airlines serving Syria has decreased significantly since the summer, while many of those airlines remaining have reduced their number of flights.”
In addition to urging citizens to leave the country, CBS News reports that Ambassador Robert Ford, who was recalled from Syria last month due to what the Obama administration called credible threats to his safety, will not return to the country later this month as planned......"
Posted by Tony at 4:27 AM