Back to Tahrir Square 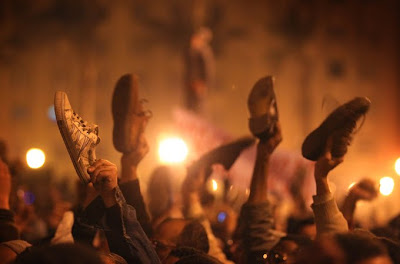 The Tom and Jerry Show

"....When Tantawi delivered his speech that evening by promising a new government, keeping the elections date intact, and the end of military rule by next June, people in Tahrir were no longer satisfied. They kept shouting, “You leave, we’re staying,” the same chant that eventually caught up with Mubarak.

The immediate problem now is the total lack of trust between the people in the streets and the military council. The people are tired of the cat and mouse game played by SCAF, where every major demand is only conceded through much struggle. Although it is true that SCAF was instrumental in accelerating the ouster of Mubarak, it is also now quite clear to the revolutionaries that SCAF has had a different agenda that oftentimes conflicts with the objectives of their revolution.

Now the revolutionaries have vowed to stay in Tahrir until SCAF cedes effective power long before next year to a new civilian national-unity government empowered to supervise the elections, supervise the writing of the constitution, and implement all their objectives without any interference or dictation by the military."
Posted by Tony at 9:24 AM