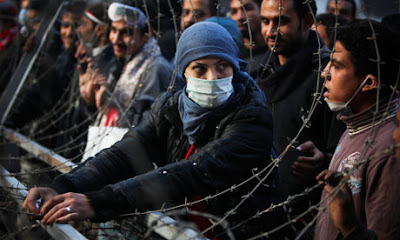 "Egypt's ruling generals have defied their critics and declared that national elections will begin as planned in three days' time, even as violent unrest continued to sweep the country and preparations began for the massive rally against the junta.

In a move that seemed certain to escalate tensions between the military government and demonstrators calling for its removal, members of the Supreme Council of the Armed Forces declared that to step down now would be a "betrayal" of the people's trust, and insisted that they would not be dislodged by a "slogan-chanting crowd".

The announcement came as revolutionary groups called for a major protest in Tahrir Square, which has been occupied by protesters for almost a week. Deadly clashes between pro-change Egyptians and security forces have left nearly 40 dead and more than 2,000 injured, transforming parts of central Cairo and other major cities into a warzone.

Egypt's interior minister said that in the current climate he could not guarantee the security of the upcoming parliamentary vote and raised the prospect of a postponement – giving heart to many protesters who believe that the ballot will have no credibility as long it is conducted under military rule...."
Posted by Tony at 3:10 PM