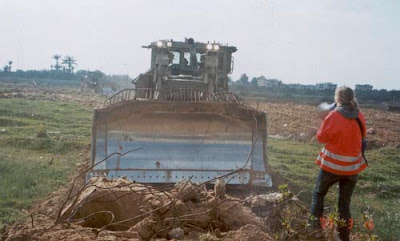 "Israel might be able to go on claiming that it will not be the first to introduce nuclear weapons into the Middle East, but it cannot do the same regarding another weapon of mass destruction: the bulldozer. The claim that terror has adopted an original new weapon, a "new fashion" as the public security minister put it, once again shows how convenient it is for us to present a one-sided and distorted picture.

The bulldozer as a destructive and even lethal weapon was not invented by the Palestinians. They are merely imitating an Israeli "fashion" that is as old as the state, or at least as old as the occupation. Let us forget for a moment the 416 villages Israel wiped off the face of the earth in 1948 - that was before there were D9 bulldozers - and focus on a more modern fashion. In Israel's hands the bulldozer has become one of the most terrifying weapons in the territories. The only difference between the Palestinians' murderous bulldozer and the Israeli bulldozer is in color and size. As usual, ours is bigger, much bigger. There is no similarity between the small backhoe the Palestinian terrorist was driving and the fearsome D9 driven by Israel Defense Forces soldiers......."
Posted by Tony at 5:21 AM