In Palestine, Even Camera Lies 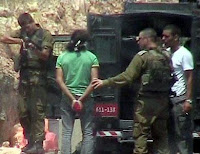 By By Akram Salhab - The West Bank
Palestine Chronicle

"......Another B’Tselem report explains that when Palestinians come to complain about their abuse, they are faced with “a system which tends not to believe them, and which tends to protect rather than prosecute those who injured them”. In most cases where a crime has been committed, procedure is to take an account of events from all those concerned, and use them, along any evidence at the scene to form a picture of what happened and thereby dish out justice accordingly. The fact that Palestinian complaints are ignored so out of hand suggests that Palestinians are not deemed human enough to be considered serious winesses.

Part of the statement by Barak is very revealing in this regard. Amongst the stream of empty words and crocodile tears of sorrow, he committed to “exact the full extent of the law in this case". ‘Only in this case’ because no Palestinian, with their deceptive lying ways, would ever be able to prove to the world that the abuse that they had suffered was real and even if they could, unless the crime they suffered was as blatant as the incident caught of film, then a suitable lie can be fabricated to explain it away.

Even when a crime is caught on film, however, it is not sufficient evidence for a conviction and as the criminal soldier from the indicent above walked free on Tuesday, Palestinians will be wondering what they need to do to for the world to take seriously the daily attacks that they face. In Palestine, it would seem, even the camera lies."
Posted by Tony at 5:40 AM