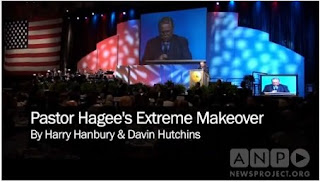 "American News Project: In late May, after three months of deliberation, John McCain called Pastor John Hagee "crazy" and renounced his endorsement. But Hagee has come back stronger than ever -- thanks to friends like William Kristol, Joe Lieberman . . . and the public relations firm W5, which also represents Microsoft, Snoop Dogg and Pamela Anderson. This week in Washington, D.C., Hagee's non-profit organization, Christians United for Israel (CUFI), brought together five thousand supporters of the bedeviled pastor, and a new regime of media relations was much in evidence. Hagee avoided issues that have caused controversy in the past (Armageddon, homosexuals, God's purposes for the Holocaust, Hurricane Katrina, etc.). By pulling back the veil and conducting unauthorized interviews with several of Hagee's Christian Zionist followers, ANP reveals the fanatical ideology that still lies behind the CUFI's more restrained rhetoric."
Posted by Tony at 4:47 AM