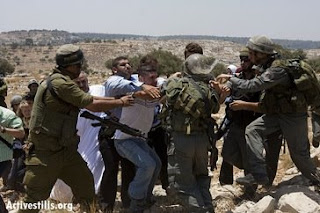 "On the 23rd July, the father of the girl who filmed the Israeli shooting of a detainee in Ni’lin and a Canadian activist were arrested during a non-violent demonstration again in Ni’lin against the construction of the apartheid wall.

Interviewed on Palestinian TV this morning, the 14 year old girl expressed concern that her family would be targeted by the Israeli army due her film being publicized. Her footage was broadcast throughout the world and has caused shock waves in Israel, where a soldier has been arrested and an official investigation launched.

Victor MacDiarmid is from Kingston, Ontario, and has twice been shot by rubber-coated steel bullets while attempting to take in supplies to Ni’lin during a recent a four-day Israeli army blockade of the village. He will be brought to court on the 24th July in Jerusalem, while the details of Jamal Amirra’s case are not yet clear."
Posted by Tony at 6:30 AM