Oil Surpluses Must be Directed to Development, not Charity: a Comment on Chavez’s Suggestion 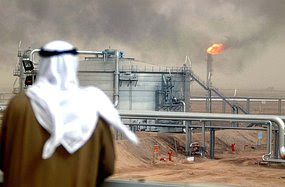 "....While it is right that the poverty of peripheral countries is to a large extent due to the previous colonial plunder and current exploitation in both unequal exchange and armed un-equal exchange as it is in Palestine, Iraq, Afghanistan and other countries undergoing military invasion and occupation, most of the regimes in peripheral countries have a long hand in the economic/social deterioration of their own peoples.

....In the Arab case, the countries of surplus transferred large amounts of surplus to the Arab countries living in a state of economic deficit. The transfer amounts went through the channels of the ruling comprador classes who found it a good opportunity to steal most of that money and to continue their corrupted habits. The donor Arab regimes never made their assistance conditioned with any investment policies or strategies. It was devoted to offsetting the deficit. It was a political consensus between the two parts of Arab ruling comprador regimes in rich and poor countries to not adopt any developed approach......

The normal development is that Arab oil pumping countries must open their doors for Arab workers and to give priority to them over those of other nationalities [2]. But, the rulers of oil pumping counties prefer non-Arab workers because they believe that Arab workers feel that they have a right to work in another Arab country, but non-Arabs will be grateful if they get the chance to work there, even if they suffer harsh exploitation and humiliation.

Since Arab Qutriyah regimes are afraid of Arab unity and see it as a threat to their selfish interests, they prefer to bring non-Arab workers on the one hand and on the other to subsidize the deficit of other Arab countries.

The Arab countries of surplus were and still are keen to obstruct any possibility of social tension, not to say revolution, in the countries of deficit because it might expand into their own countries.....
But, Arab ruling classes in general, and those of oil in particular are externalizing regimes. They are not independent, their surplus is oriented lately to cover the US deficit, under the claim that their currency will melt down following the melting of US dollar. This is in addition to the fact that these regimes are accelerating their normalization with the Zionist Ashkenazi Regime ZAR. It is even worse, as Stanley Fischer, the governor of the Bank of Israel, declared lately that he is quite sure that Arab oil countries will rescue the Israeli economy to the extent that it will avoid the passive effects which are harming it because of the US crisis. The Arab regimes are too far even behind Chavez’s charitable call....."
Posted by Tony at 8:37 AM