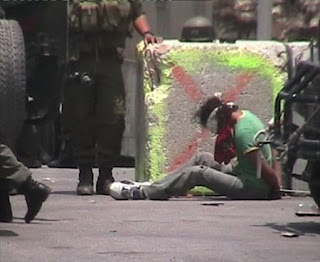 "The Israel Defense Forces soldier who was filmed shooting a bound and blindfolded Palestinian with a rubber bullet at point blank range told military investigators on Monday that his regiment commander had ordered him to fire.

The incident was caught on camera by a villager and released Sunday by the human rights group B'Tselem. The footage apparently shows a soldier firing his rifle toward a Palestinian detained at the protest in the West Bank village of Na'alin. The rifle appeared to have been modified to fire rubber-coated metal bullets.

During his questioning, the soldier said that his commander, lieutenant colonel Omri, had told him "shoot him" three times. He then fired his rifle at the protester's foot......"
Posted by Tony at 6:01 AM