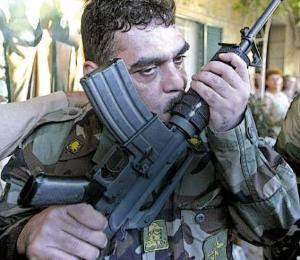 "21/07/2008 Samir Kintar celebrated his 46th birthday on Sunday surrounded by friends and family from his hometown Aabey for the first time since he was detained thirty years ago. The Islamic resistance and the Detainees Association observed the occasion in a way worthy of the freed fighter.

Kintar was released along with four Hezbollah fighters and the bodies of 199 Lebanese, Arab and Palestinian fighters in exchange with two dead Israeli soldiers in the framework of Operation al-Redwan on July 16.

A detachment of resistance fighters saluted Kintar and gave him "the sweetest gift after freedom", as Kintar described. The gift was an Israeli military rifle gained from the July 2006 war. "I want to salute the Islamic resistance and its secretary general for this trust. First of all, it's a renewal of trust in me as a resistance fighter and secondly, God willing, it will take part in retaliating the assassination of martyr Hajj Imad Moghniyeh," Kintar said while holding the rifle with great pride.

Freed Kintar was seen blissful when celebrating his birthday away from the prison cell. No more biscuits would be served on Kintar's birthday. After 30 years, Kintar cut a big cake decorated by his picture along with Sayyed Nasrallah, the same picture decorating his family house.

After the celebration, Kintar’s residence in Aabey was overcrowded with people of all ages who came to greet the hero as well as a group of reporters who wrote about Kintar for years and a flood of phone calls from Lebanon and Arab countries congratulating him on his return home.

Congratulations on your freedom Samir, and happy birthday."
Posted by Tony at 4:22 AM