Is Obama the 'Antiwar Candidate'? 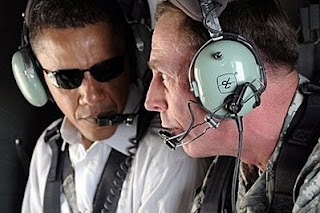 Two words of advice for the antiwar voter: Caveat emptor

"Now that Barack Obama has pulled the rug out from under John McCain's "victory or death" campaign theme, with the invaluable assistance of Iraqi Prime Minister Nouri al-Maliki, he's preparing the way for a surge of his own: an Afghan surge, to be precise. Averring that we need to put more troops in Afghanistan, whose U.S.-supported "president" functions as little more than the mayor of Kabul, Obama is posing earnestly next to as many uniforms as he can, hoping to establish his credentials as a plausible wartime president.
So, you thought we'd be rid of the endless "war on terrorism" once we got George W. Bush out of the White House, and ensconced a Democrat in his place? Well, think again, and get ready for an escalation of the Other War – the one in Afghanistan, a much tougher and more intractable prospect than Iraq by a longshot........
The mistakes of the past cannot be undone, but if we learn from them we can minimize the amount of "blowback" that continues to come at us from all directions. Alas, it appears that, no matter who wins the White House this November, a foreign policy made by those who have learned nothing and regret nothing will remain in place."
Posted by Tony at 5:08 AM