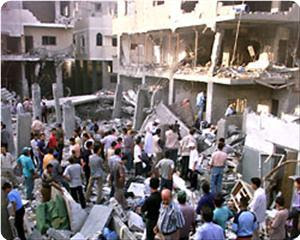 "MADRID/GAZA, (PIC)- The Spanish national court, which is the highest judicial institution in Spain, has issued on Tuesday an arrest warrant against seven Israeli officials for committing war crimes.

The Palestinian center for human rights filed a lawsuit against seven former Israeli military officials before the court last month on behalf of six Palestinians who survived an Israeli extra judicial execution operation in the Gaza Strip in July 2002.

According to the court ruling, the seven Israeli officials will be promptly arrested once they landed in Spain without any consideration to diplomatic immunity that a number of them may possess now, explaining that the charges filed against the seven officials were grave and classified under "war crimes".

The ruling bothered the Israeli occupation government as the Israeli foreign affairs ministry received a copy of the ruling, and warned the accused officials about it. The ministry was reportedly studying legal dimensions of the case.

An Israeli F-16 fighter plane dropped 1000kg bomb on the house of Sheikh Salah Shehada, who was then with his wife and two of his daughters. The attack killed Shehada, his wife, and his two daughters.

More then 18 Palestinian civilians were killed and 77 others were wounded in the bombardment that also totally destroyed 11 Palestinian houses in addition to that of Shehada.

Moshe Ya'alon, the incumbent IOF chief of staff, acknowledged the crime, and that the occupation army was aware of the presence of Shadah's wife and daughters inside the house.