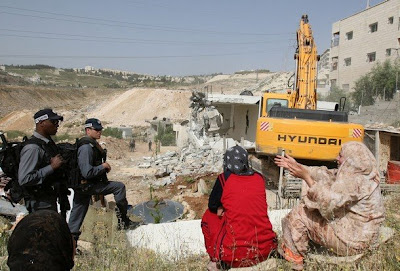 Palestinian Family Denied Even Half a House

"It must be the smallest Israeli settlement in the occupied Palestinian territories: just half a house. But Palestinian officials and Israeli human rights groups are concerned that it represents the first stage of a plan to eradicate the historical neighbourhood of Sheikh Jarrah in East Jerusalem, cutting off one of the main routes by which Palestinians reach the Old City and its holy sites......

Israeli officials have been leasing an olive grove belonging to the Arab Hotels Co. to a settler group called Ateret Cohanim in a deal the local Haaretz newspaper recently termed “underhand”. Together with a right-wing US Jewish millionaire, Irving Moskowitz, who has bought the Shepherd’s Hotel on nearby Mount Scopus, the settlers hope to build 250 flats on the grove.

“For the settlers, Sheikh Jarrah is the link they need between the western half of the city and neighbouring Mount Scopus. Although they seem to be acting on their own initiative in this case, they are in fact doing the dirty work of the government.”

The settlers next to the Khurds refused to comment. However, a friend, Shira Ganz, 32, an immigrant from Ukraine who has been squatting in an empty Palestinian home nearby with her husband and three young children, said the families were committed to living in Sheikh Jarrah. “It’s written in the Bible that we have a right to everywhere in this land, and here we are only minutes from the Western Wall and the Temple Mount. We are not frightened of living next to the Palestinians. If we were, we would leave the promised land and move to Britain or the US."
Posted by Tony at 9:26 AM