'Israel to Free Barghuti for Shalit' 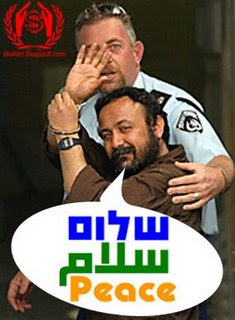 "21/07/2008 Israel has agreed in principle to release Marwan Barghuti and a number of prominent Hamas leaders from prison – diplomatic sources were quoted as saying in Monday's 'Al-Bayan' newspaper, based in the United Arab Emirates.

According to the report, Israel will free Barghuti, Fatah's former secretary-general in the West Bank, and the Hamas officials as part of the burgeoning exchange deal with the Islamic resistance group, Hamas, in return for captured Israeli occupation soldier Gilad Shalit.

The paper asserts that Egypt has been successful in reconciling the differences between Israel and Hamas over the deal, but now fears other groups [pray tell, who could that be?? Hmmm...] in the region may attempt to sabotage the deal......"
Posted by Tony at 4:31 AM