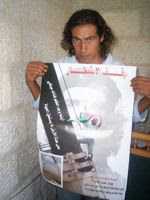 "BI'ILIN, West Bank, Jul 25 (IPS) - A Youtube video, uploaded on the Internet this week, showing a blindfolded and handcuffed Palestinian being fired on at close range by an Israeli soldier in the presence of a Lieutenant-Colonel, has made international and regional headlines.

On Jul. 7, Ashraf Abu-Rahma, 27, from Bi'ilin village near Ramallah in the central West Bank was arrested, beaten up, forced to sit blindfolded and handcuffed in the blazing sun for three hours without water, and then deliberately shot on his foot from less than a metre away, allegedly on his commander's orders.

"I thought I was going to be arrested but not shot," Ashraf told IPS during an exclusive interview in Bi'ilin........"
Posted by Tony at 5:48 AM