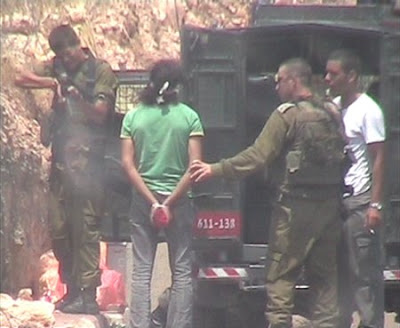 20 July '08: B'Tselem: Prosecute soldier who fired 'rubber' bullet at Palestinian detainee, Investigate the involvement of an officer in the event and suspected cover-up
Contributed by Lucia in Spain

"Today, B'Tselem is publishing a video clip documenting a soldier firing a rubber coated steel bullet, from extremely close range, at a cuffed and blindfolded Palestinian detainee. The shooting took place in the presence of a lieutenant colonel, who was holding the Palestinian's arm when the shot was fired.

The incident took place on 7 July, in Nil'in, a village in the West Bank. A Palestinian demonstrator, Ashraf Abu Rahma, 27, was stopped by soldiers, who cuffed and blindfolded him for about thirty minutes, during which time, according to Abu-Rahma, they beat him. Afterwards, a group of soldiers and border policemen led him to an army jeep. The video clip shows a soldier aim his weapon at the demonstrator's legs, from about 1.5 meters away, and fire a rubber coated steel bullet at him. Abu-Rahma stated that the bullet hit his left toe, received treatment from an army medic, and released by the soldiers.

A fourteen-year-old Palestinian girl from Nil'in filmed the incident from her house in the village, and B'Tselem received it this morning......"
Posted by Tony at 8:21 PM