The Nakba, Intel, and Kiryat Gat 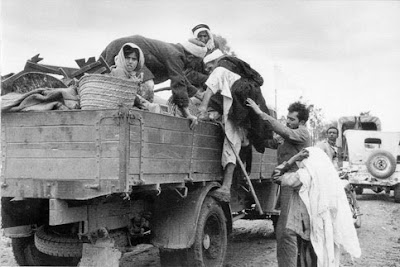 Residents of al-Faluja flee in 1949

Henry Norr, The Electronic Intifada, 23 July 2008
(Henry Norr covered Intel as a technology reporter and columnist for the San Francisco Chronicle until he was fired in 2003, after writing a column about Kiryat Gat and getting arrested in a demonstration the day the US invaded Iraq. In recent years he has spent six months in occupied Palestine as a volunteer for the International Solidarity Movement and the International Middle East Media Center.)

"In an extravagant ceremony that featured acrobats, drummers, a children's choir, and speeches by Israeli Prime Minister Ehud Olmert (in person) and the two top executives of chipmaker Intel Corp. (on giant video screens), the company this month dedicated a new, state-of-the-art chip-manufacturing plant in the south-central Israeli town of Kiryat Gat.

The hoopla is understandable, from the Intel and Israeli perspectives. The new facility, known as Fab 28, is the largest private-sector investment ever made in Israel......

These recent developments have brought unaccustomed attention to Kiryat Gat, at least within Israel. But even the Israeli press doesn't discuss what's most interesting about the town: its origins.

Sixty years ago, there was no Kiryat Gat. The land it now occupies was divided between two Palestinian villages, al-Faluja and 'Iraq al-Manshiya. While the area is well within the Green Line, Israel's 1949-67 border, its history is in one way unique: Israeli forces never captured it during the 1948-49 war. Egyptian forces occupied it in late May 1948, and although later Israeli counter-offensives broke up their front and laid siege to the two villages -- known at the time as the "Faluja pocket" -- the 4,000 Egyptian troops deployed there (including a young officer named Gamal Abdel Nasser, soon to become president of his country) held out until Egypt and Israel agreed to an armistice on 24 February 1949.

Stranded and surrounded, the Egyptians were in no position to stay in the area. To their credit, however, they insisted as a condition of their withdrawal that Israel guarantee the safety of the civilians in the area -- about 2,000 locals and some 1,100 refugees from other parts of Palestine......"
Posted by Tony at 4:29 AM