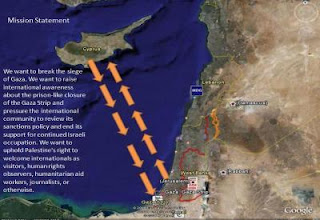 "Manager of FreeGaza Movement phoned today Chairman of Popular Committee aginest the siege on Gaza, MP Jamal N. El Khoudary. Both spoke about the latest preparations regarding the coming ship in august.

Mr. El Khoudary asserted that all arrangements are being ready now. He added that the ship has to come to draw more attention on this suffocating siege.

"we aspire to end the siege of Gaza by all peacfull and non-violent ways. This Voyage is one of the activities that suit our goals so we will go on." EL Khoudary said

Free Gaza Movement is a peace activists group based in Europe. It aims at coming to Gaza to lift the siege by the next August. Popular Committee Against Siege (PCAS) and other Palestinian groups are receiving them. There will be a massive media coverage and public participation.

The historic illegal appropriation of Palestinian land, home and heritage is at the heart of the Middle East conflict. It has given rise to the largest ongoing refugee population in the world. It paved the way for subsequent land theft in 1967, and the ongoing ethnic cleansing that has squeezed Palestinians in the West Bank into ghettos and bantustans surrounded by 27-foot walls, sniper towers, and military guards. It has created the open-air prison of Gaza with an impoverished and overcrowded population of 1.4 million inhabitants.
This tragic event has dispossessed and disinherited Palestinians all over the world; and a destitute population of refugees with only their memories of Palestine, crumbling property deeds, and an undaunted will to return.

We want to break the siege of Gaza. We want to raise international awareness about the prison-like closure of the Gaza Strip and pressure the international community to review its sanctions policy and end its support for continued Israeli occupation. We want to uphold Palestine's right to welcome internationals as visitors, human rights observers, humanitarian aid workers, journalists, or otherwise.

We are these human rights observers, aid workers, and journalists. We have years of experience volunteering in Gaza and the West Bank at the invitation of Palestinians. But now, because of the increasing stranglehold of Israel's illegal occupation of Palestine, many of us find it almost impossible to enter Gaza, and an increasing number have been refused entry to Israel and the West Bank as well. Despite the great need for our work, the Israeli Government will not allow us in to do it. "
Posted by Tony at 5:43 AM