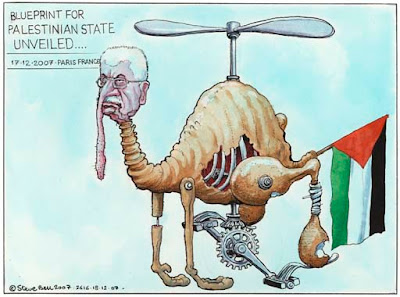 "As British Prime Minister Gordon Brown was having an audience with Palestinian Authority (PA) Chairman Mahmoud Abbas in Bethlehem, the Israeli occupation army was raping anew the Palestinian town of Nablus, rounding up and humiliating innocent people, violating homes and vandalizing businesses.

On Sunday and early Monday, the so-called Israeli Defense Forces raided the northern city, for the fourth time in less than three weeks, as thousands of CIA-trained Palestinian security personnel were watching from their comfortable headquarters nearby.

The invading forces arrested dozens of innocent people, including a lawmaker named Muna Mansur, the wife of an Islamic political leader who was murdered by a Jewish death squad while sitting in his office in downtown Nablus several years ago.....

These acts of rape passed quietly as the governments of Europe and North America, thoroughly absorbed in their pornographic hypocrisy toward the Palestinian plight, kept silent. After all, the victims are Palestinian, they are Arabs, they are Muslims.

These are the same governments that have been demanding rather shamelessly the prompt and unconditional release of an Israeli combat soldier who was taken prisoner by Palestinian fighters near the Gaza Strip more than two years ago, while utterly ignoring the fate of more than 10,000 Palestinian detainees languishing in Israeli dungeons and detention camps......

Brown, whose country gave birth to ugly Zionist entity, vowed that Britain would “back Israel’s right to exist,” a euphemism for backing Israel’s settlement expansion and territorial aggrandizement at the expense of the Palestinian people.....

Nonetheless, the often criminal western collusion with Israel against the Palestinians and against justice wouldn’t have had a conspicuously sinister impact had it not been for the presence of a perfidious “Palestinian” authority that is very much at America’s, and therefore Israel’s beck and call.

Well, what is the point of having a “Palestinian Authority” in whose presence and under whose rubric the Israeli occupation army rapes our population centers every day and every hour and every minute?

What is the point of having flamboyant PA leaders having photo ops and “friendly and constructive and positive” meetings with western leaders when all these encounters can’t even save a Palestinian home from the claws of one Israeli bulldozer?

Surely, no one is demanding that the PA militarily confronts brutal Israeli barbarianism.

However, playing the role of a Palestinian Judenrat vis-à-vis Israel represents the ultimate act of national treason. That is the message that Palestinians everywhere ought to communicate to the American-backed junta in Ramallah."
Posted by Tony at 8:25 PM