House of Saud in Service of the Empire: Outsourcing Guantanamo and Torture to Riyadh! What Could be More Natural? 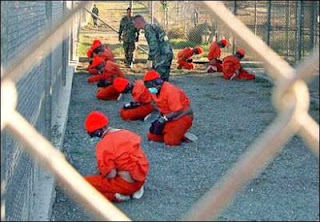 "Saudi Arabia is to build five modern prisons in the kingdom to replace US Guantanamo detention facility, a new report has revealed.

Jordanian Al-Majd daily quoted unnamed sources as saying that US Central Intelligence Agency (CIA) and Saudi officials are cooperating to construct the prisons which are to replace Guantanamo and US secret prisons in Europe.

Riyadh is to spent about two billion Saudi Rials for the project which can accommodate up to 18000 inmates, they added.

Bin laden firm and with the help of German engineers will build the prisons in the Saudi cities of Mecca, Haer, Demmam, and Qasim.

The US has been under pressure due to violating individual rights in its detention camps in Europe and Guantanamo Bay.

UN human rights investigators have urged the White House to shut down the Guantanamo camp."
Posted by Tony at 2:11 PM