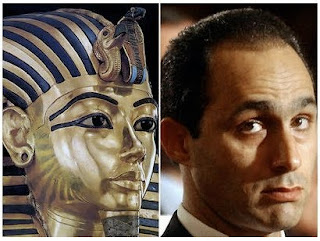 "......But the telltale sign that el-Tayeb will simply reflect the regime’s wishes is his membership in Mubarak’s ruling National Democratic Party (NDP)—the only political party in Egypt that matters.

He is also a member of the NDP’s policies committee, chaired by Mubarak’s son Gamal no less. Gamal is widely expected to succeed his father if and when he steps down. With both houses of parliament having solid NDP majorities, Hosni Mubarak was able to easily pass a series of constitutional amendments making it nearly impossible for any outside or independent candidate from challenging Gamal. Despite his recent appointment, el-Tayeb has refused to resign from the NDP.

It thus appears Mubarak and son will now have the requisite backing of Egypt’s preeminent spiritual authority in their quest to achieve dynastic authoritarian rule....."
Posted by Tony at 9:11 AM