Peace talks could be delayed for a year, warns Israel.

By Rupert Cornwell in Washington

"An unyielding Benjamin Netanyahu held a 90-minute meeting with Barack Obama at the White House last night as the US intensified pressure on the Israeli Prime Minister to rein in settlements in disputed East Jerusalem. But, in talks earlier in the day with Congressional leaders on Capitol Hill, Mr Netanyahu warned that peace negotiations could be delayed another year unless the Palestinians dropped their "illogical and unreasonable" demand for a full settlement freeze, according to his spokesman....." 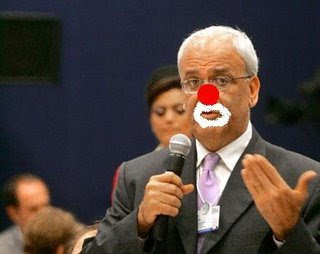 Take that, "Chief" Palestinian Clown (Negotiator?) Erikat!
Posted by Tony at 4:09 AM