In the fight over settlements, who are Israel's real friends? 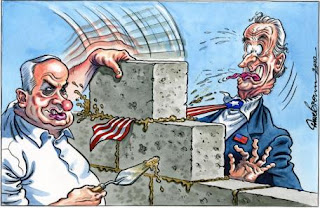 "When Vice President Biden arrived in Israel on March 8, seeking to smooth U.S. ties with the Netanyahu government and jump-start peace talks, he began by reaffirming America's "absolute, total, unvarnished commitment to Israel's security." The nearly simultaneous announcement by Israel that it plans to build another 1,600 homes in disputed East Jerusalem was not the warm embrace he was expecting......

Speakers at the AIPAC conference will undoubtedly defend the special relationship and warn Washington against putting pressure on Israel. But this short-sighted approach would be a disaster for all sides. In her scheduled address to the conference, Secretary of State Hillary Rodham Clinton should reaffirm the U.S. commitment to Israel's existence but make it crystal clear that Washington will no longer tolerate Israel's self-defeating policy on settlements. She should explain unambiguously that Israel faces a choice: It can end the occupation, embrace a genuine two-state solution, preserve its democratic and Jewish character [Say what? How could it be Jewish and democratic? You know better than that Stephen!]and remain a cherished U.S. ally. Or it can continue the occupation of the West Bank and the siege of Gaza -- a course that will eventually force it to abandon either its Jewish character or its democratic principles [?], and jeopardize its standing with its most important partner.

Israel's friends in America have a choice to make, too. The current crisis will get smoothed over, but more are bound to occur so long as the Palestinians do not have a viable state of their own.

The best way to prevent recurring fights between Washington and Jerusalem is for key groups in the pro-Israel community to back Obama's vision of "two states for two peoples" and to support him when he presses both sides to make peace. It would be wonderful if AIPAC and other like-minded groups put their considerable clout behind this vision, but I wouldn't bet on it. "
Posted by Tony at 4:05 AM