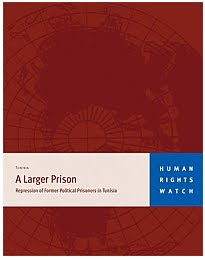 "When Tunisia releases political prisoners, it ensures that life resembles a larger prison defined by surveillance, threats, and a cocktail of restrictions," said Sarah Leah Whitson, Middle East and North Africa director at Human Rights Watch. "The government's attempts to silence Human Rights Watch reflect another element of the repression that is a fact of life for too many Tunisians."

The 42-page report, "A Larger Prison: Repression of former political prisoners in Tunisia," documents the range of repressive measures, many of them arbitrary, that Tunisian authorities impose on former prisoners. These include close monitoring and surveillance, denial of passports, threats to re-arrest some who speak out on human rights or politics, and restrictions on movement that are not delivered in writing to the affected person and the violation of which can lead to re-imprisonment.
Many of these measures appear to be imposed at the whim of officials, without any legal basis. Courts do sometimes legally impose "supplementary sentences" of "administrative control" when they send defendants to prison....."
Posted by Tony at 4:27 AM