You Won't See This in an Arab Country: Thai Troops Retreat in Face of 80,000 Protesters 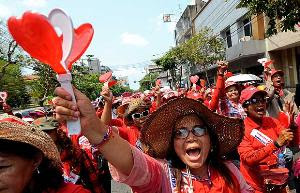 "27/03/2010 Thai troops withdrew from several security posts in the capital Saturday, under pressure from some 80,000 red-shirted protesters who mounted a new rally to demand fresh elections.

The "Red Shirts" loyal to ousted premier Thaksin Shinawatra targeted seven points where soldiers have been stationed during two weeks of street demonstrations, including the city's zoo and Buddhist temples.

In the face of the massive flag-waving crowds of protesters, who arrived in cars, on motorbikes and on foot, the military agreed to retreat from positions in Bangkok's old quarter where the Reds' main rally base is situated......"
Posted by Tony at 7:51 AM