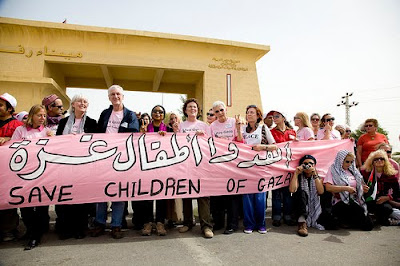 "Washington D.C.: Shortly after announcing Israel’s commitment to defense in his address to the annual American Israel Public Affairs Committee (AIPAC) Gala, Israeli Prime Minister Benjamin Netanyahu was disrupted by a demonstrator. Rae Abileah, 27, from Half Moon Bay, CA, jumped onto AIPAC Executive Director Howard Kohr’s private table alongside the stage and unfurled a pink banner that said “Netanyahu: Build Peace Not Settlements!” Abileah shouted, “Lift the siege of Gaza! No illegal settlements!” as she was forcefully removed from the building. A second disruption came moments later from Joan Stallard, from Washington, DC, who shouted, “Stop the settlements!”
CODEPINK’s protests of the policies of AIPAC during their national conference this week have included daily morning protests, staging of a checkpoint for attendees, an afternoon press conference announcing the launch of a city-wide boycott of products illegally made in the settlements, and the release this morning of a spoof press release from AIPAC announcing that the organization was calling for a settlement freeze. Tomorrow, Tuesday, March 23, at noon CODEPINK is planning to build a settlement (including homes and beds) inside Senator Schumer’s and Senator Lieberman’s offices (Hart Senate Building, offices 313 and 706)......"
Posted by Tony at 6:47 AM