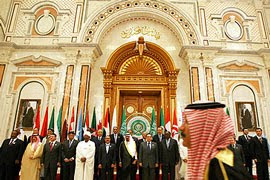 "....Arab summits were capable of at least rhetorical surprises: the "Three No's" of Khartoum (no to peace with Israel, no to recognition, and no to negotiation) in 1967 are the most famous, but now we know that those governments that officially endorsed the formula were already negotiating secretly with the Israelis.

The US government now keeps a very tight lid over the regimes that it controls. When King Abdullah, the Saudi monarch, referred to the US occupation in Iraq as "illegitimate" during his opening speech at the Riyadh Arab summit in 2007, a diplomatic crisis ensued and the King has never used that expression since.

The Arab people now are accustomed to gatherings that produce long, tedious documents that no one (except translators at foreign embassies) actually read.

Between watching Syrian and Turkish TV serials, and watching proceedings of Arab summits, the Arab people may be worshipping the remote control. Gone are the days when they were subjected to one state-controlled channel that bombarded them with speeches and daily movements of the "dear Arab leader"."
Posted by Tony at 7:13 AM