My letter to US Ambassdor in The Hague asking that Mohammed Omer be given his visa, allowed to speak #Gaza 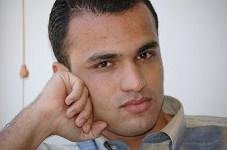 "I sent this letter via email in response to this action alert: "Protest the US' silencing of Palestinian journalist Mohammed Omer"
.....
Dear Madam Ambassador,

On April 5, I am scheduled to appear at Chicago's Newberry Library to moderate an event with Mohammed Omer, an award-winning young Palestinian photographer and journalist from the Gaza Strip. I was very disturbed to learn that Mr. Omer visited the US Consulate in the Netherlands to receive his visa a few days ago but was not given his visa as expected despite the fact that all his paperwork was in order and he has previously visited the United States without incident.

As things stand, Mr. Omer is waiting in limbo, unsure if our event in Chicago, or the other cities around the US where Americans are waiting for him will take place as scheduled. If they do not, this would not only be an injustice for Mr. Omer, but a real injury to the efforts of people in the United States who have worked to bring him here and to share his work, and to hundreds or thousands more who will be deprived of this opportunity to hear from a witness to events in an area of the world which as you know the US is deeply involved.

The citation for the 2008 Martha Gellhorn Prize for journalism, of which Mr. Omer is the youngest ever recipient, stated, "Every day, he reports from a war zone, where he is also a prisoner. He is a profoundly humane witness to one of the great injustices of our time. He is the voice of the voiceless ... Working alone in extremely difficult and often dangerous circumstances, [Omer has] reported unpalatable truths validated by powerful facts."

I can only think that the US government would want to encourage its citizens to hear directly about what is happening in the Gaza Strip and to see some of Mr. Omer's arresting and extraordinary images. You can see for yourself some of the images and stories for which Mr. Omer deservedly won the Gellhorn Prize for Journalism here: http://ipsnews.net/new_focus/GellhormPrize/omer.asp
.....

What is so disturbing about the unexplained and unexpected delay in Mr. Omer's visa is that it appears to fit a long-standing pattern of the US denying or delaying visas to scholars, artists, journalists and others from Arab or majority Muslim countries. Many people had expected that with the new administration's declared intention of a "new beginning" with that part of the world, these arbitrary policies would end, and that the US government would do all it could to facilitate direct exchanges. I cannot imagine that the United States would intentionally want to prevent Mr. Omer speaking to audiences in our country, so therefore I would expect that you would do all you can to ensure his visa is issued and his visit takes place on time......"
Posted by Tony at 4:28 AM