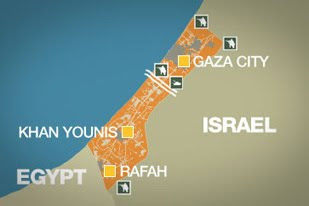 "At least two Israeli soldiers have been killed in an explosion east of the Gaza Strip town of Khan Younis, reports say.

According to witnesses an Israeli patrol along the frontline was targeted with a bomb, and then a gunfight followed the explosion.

There has been no official confirmation yet from the Israeli military and details of the clash are still coming in.

Al-Qassam Brigades - the armed wing of Hamas - has claimed responsibility....."
Posted by Tony at 8:57 AM