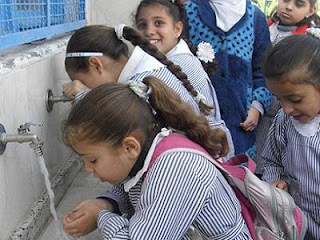 "Toni Morrison wrote, "All water has a perfect memory and is forever trying to get back to where it was." I feel it is the same for Palestinian refugees, who have struggled for decades for their right to return home.....

We move to help the children as quickly as we can. Children in Gaza will have the chance to drink clean and soft water, but only at the rate in which we can implement the Maia Project. And we race against time. The UN estimates that Gaza will have no drinking water in the next 15 years.

Water is life, but here in Gaza, it can also bring death. Numerous military attacks on the Gaza Strip have devastated Gaza’s water infrastructure. The twenty-two day assault in January 2009 destroyed or rendered unusable an estimated 800 of Gaza’s 2,000 wells, and caused $5.97 million in damage to our water and wastewater treatment facilities. Since January 2009, the Gaza health ministry and the World Health Organization have issued drinking, seafood and swimming advisories.

We yearn for our water and our freedoms to return to us. We roll up our sleeves and hope for rain, the kind of rain that floods the hearts and minds of those who hunger and thirst for justice.