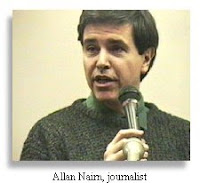 "In Indonesia, investigative journalist Allan Nairn is facing possible arrest for exposing that US-backed Indonesian armed forces assassinated a series of civilian activists last year. Since Allan Nairn broke the news of the assassination program on Democracy Now! on Friday, the Indonesian press has been buzzing with the allegations. A military spokesman told the Jakarta Globe that the military is considering legal action against Nairn. Earlier today, Nairn issued a public challenge to the Indonesian military to arrest him so that he could face off with the military in open court....."
Posted by Tony at 11:24 AM